CIWC members, many of whom are immigrants, formed an Immigrant Rights Committee (IRC) to organize around immigrant justice.

The IRC educates the community with Know Your Rights trainings. These trainings teach immigrants, and citizens, what to do if you are stopped by the police in various situations including: 1)in the workplace 2)in your home 3)while driving or in a vehicle 4)while walking around in public. The trainings also review current efforts around immigration legislation or harmful programs such as (in)Secure Communities. Finally, the trainings emphasize empowerment and action in tackling issues within the community such as violence against immigrants or fighting deportations.

The IRC is also involved in campaigns, both local and national efforts. For example, through participation in a local alliance called Communities United for Citizenship, CIWC members have advocated for DREAMers to receive drivers’ licenses, for immigration reform, and for the unanimous City Council adoption of an Immigrant Friendly City Resolution in Cincinnati. Most recently, CIWC members are planning to organize against the mass dentention and deportation of immigrants in the community.

The CIWC  coordinates Immigrant Leadership Trainings which represent intensive educational sessions to educate and encourage immigrants to lead campaigns for immigrant justice. These leadership trainings also act as train-the-trainer spaces so that the participants themselves can go back and educate their own communities on rights-based and organizing skills.

Ultimately, immigrant rights go  hand in hand with worker justice. Regardless of what the political process brings about in terms of reform, immigrants are now– and will continue to be– exploited as workers alongside their non-immigrant brothers and sisters. Fighting for worker power for all workers, regardless of documentation status, is a goal of the CIWC. 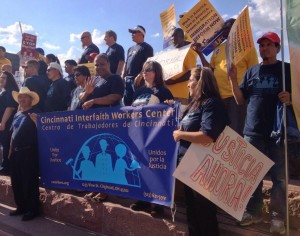 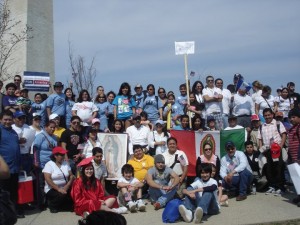 CIWC members in Washington DC in 2010 for March for America