We did it!  We passed the wage theft ordinance in one amazing week at City Hall.    Ordinance Number 22-2016, Cincinnati’s  Wage Enforcement Ordinance, is Ohio’s first attempt to confront wage theft at the local level.

Here is a collection of the News Media coverage.

Here is a collection of radio interviews.

Wage theft is the illegal withholding of wages that are rightfully owed to an employee. This can take the form of being paid less than the minimum wage, being shorted hours, being forced to work off the clock, not being paid overtime, or being misclassified as an independent contractor so that overtime requirements do not apply.

National research shows that 2 out of 3 low-wage workers experience wage theft. Low-income workers (earning less than $10 an hour) in the city lose over $52 million in wages each year to employer theft, according to a recent CIWC study. That is why we need a City of Cincinnati wage theft ordinance now. We are urging the City of Cincinnati to dedicate the resources necessary to truly confront wage theft, which is the most prevalent financial crime against working people in the state of Ohio. As Kim Bobo, executive director of the national Interfaith Worker Justice has written, “This is the crime that no one talks about.”

JUST PAY CINCINNATI is a local legislative campaign to fight wage theft for all who work in Cincinnati: black, brown, white, union, non-union, immigrant, native born, public sector, private sector, retail, service, industrial, and construction workers, and everyone in between.

Employers who misclassify workers may not be paying proper overtime compensation, workers’ compensation premiums and federal taxes that support workers. Employers regularly pay wages well below the legal minimum, in direct violation of Cincinnati’s Living Wage ordinance, demand long hours with no overtime, instruct workers to lie to labor investigators, and retaliate against those who seek to protect their rights. Retaliation keeps workers from speaking up. Employers often terminate employment, threaten to call immigration, and threaten to sue workers when workers complain of unlawful wages in an effort to silence them. The ordinance creates new avenues for victims of wage theft to bring forth claims, and for perpetrators to be denied city contracts, permits and licenses.

Low-wage and immigrant workers are frequently the victims of wage theft. A landmark 2009 study by the National Employment Law Project (NELP) of nearly 4,500 low-wage workers in three major cities found that more than 60 percent of low-wage workers have had some pay illegally withheld by their employer each week, equivalent to $2,634 per year, on average, in unpaid wages. In Cincinnati, it is documented that low-wage workers lose millions of dollars per year to wage theft. 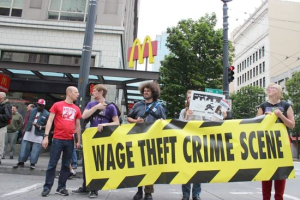 Stolen wages often result in economic hardship for workers and their families. Missing a paycheck can have dramatic consequences as workers may have no other options than to seek out high-cost interest loans or forgo paying bills like rent, utilities, or car payments, which can quickly trap families into a never-ending cycle of debt and poverty. While low-wage workers are especially vulnerable, wage theft can and does occur in all industries and professions, as shown by the following recent Dept. of Labor recoveries in the city of Cincinnati: Walmart ($23,000); Sigma Capital ($111,455); Sterling Medical Corp. ($149,800); Triton Services ($5,724); Club Chef ($24,466); Dancing Wasabi ($38,494); Widmer’s ($34,522); Cincinnatian Hotel ($29,273.)

Wage theft does not just hurt workers. The Government Accountability Office found that independent contractor misclassification costs the federal government nearly $3 billion in unpaid payroll and income taxes and revenues each year. In addition, state and local governments also lose out on tens of millions of dollars annually that should be going towards unemployment insurance and workers’ compensation funds. To find out more about the Just Pay Cincy campaign, please contact the CIWC: at (513) 621-6991 or info@cworkers.org.