Wage Theft in the News: Now You LLC Me, Now You Don’t: Shady Web of AZ, UT Wage Theft and Misclassification Uncovered

After a five-year investigation of the illegal business practices of 16 defendants in Utah and Arizona, more than 1,000 construction workers will receive over $600,000 in back pay.  In their announcement, the U.S. Department of Labor said that consent judgements from the defendants, operating collectively as CSG Workforce Partners, Universal Contracting, LLC and Arizona Tract/Arizona CLA, will end the forced signing of documents which misclassified the workers as independent contractors. 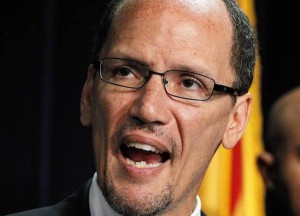 Secretary of Labor Secretary Thomas Perez described the gravity of the matter in a Huffington Post op-ed:

One day the construction workers were building houses in Utah and Arizona as employees, then the next day performing the same work, on the very same job sites and for the same companies, without the protection of federal and state wage and safety laws. The companies, in turn, avoided paying hundreds of thousands of dollars in payroll taxes.

As part of their business scheme, the employers changed their name to continue operating in Arizona using the same flawed and illegal business model.  The Labor Department investigation crossed state borders. Perez defended the lengthy investigation:

“Hiding behind deceptive legal partnerships to reduce wages owed to employees is wrong. We will not tolerate denying overtime and other employment rights to workers.  We will combat schemes like these with every enforcement tool we have, including partnering with other federal and state agencies to ensure that workers are not misclassified as owners or members of LLCs or otherwise. Deceptions like these deny workers hard-earned wages, hurt families who depend most on those wages, and leave workers without important protections if they’re injured on the job or laid off.”

In addition to the back pay and penalties, the consent judgements require the company to stop using LLC’s to avoid FLSA compliance, to abide by the FLSA, to treat themselves as “employers” and their workers as “employees,” to comply with the recordkeeping and anti-retaliation provisions of the FLSA, and to pay all applicable federal,state, and local taxes.

Perez chalked the successful investigation up to coordination between agencies:

We are taking a vigorous approach to enforcement, one that involves strong partnerships with the IRS and 20 states. Success in this space requires information sharing, joint compliance assistance and coordinated enforcement. We depend also on tips and referrals from companies that are being undercut by their competitors’ violations.

In a statement, U.S. Solicitor of Labor M. Patricia Smith praised the investigation and its results:

“We are pleased that this multi-agency effort has helped so many workers find justice, and produced a change in business practices in the regional construction industry.  This kind of cooperation among state and federal law enforcement authorities will serve as a model for preventing misclassification and similar practices that deny workers’ their wages and protections, and undermine law-abiding employers. The resolution of this case should send a strong message to any other employers, in any industry, contemplating such a scheme.”

Do you have a problem at work? call us!